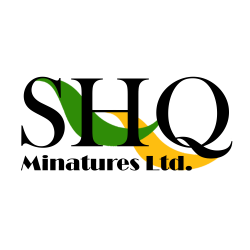 SHQ was originally started in 1993, when it first released a Vietnam Range of about 6 figure sets.

In 1994, for the 50th Anniversary of D Day, they released a WWII Range and things grew from there. Today, there is an estimated 1,500 products, comprising of almost 5,000 individual models, figures, guns, tanks, vehicles and more.

Ian, who now owns and runs SHQ Ltd, has been designing model kits for the company, since 1995. A good part of the range has been designed by him alongside appreciable contributions from other designers through the years.

I designed my first set of masters in 1994 for a Renault FT17 Tank (Start big kiddo!) thereafter I have designed kits for SHQ (and many other companies) since then. I am a model maker at heart, but also enjoy larger war games especially if they are sited in North Africa with some Matilda II and cruiser tanks.”

I recently had the opportunity to acquire parts of this much appreciated and patronised company of which I have committed so much time and work over the last quarter century. I look forward to continuing the great works of the last two owners, and also growing the business with improved web access and new products. Given my core skills, the latter will be straight forward, and already have a number of new kits designed and ready for the moulds.

The new shop is all up and running, with new images and easy listings...so head on over and place your orders.

SHQ Miniatures Ltd. is based in Somerset, selling all types of exclusive figures for war gaming. If you have any questions, please feel free to call us.

0
Your Cart
×
We use cookies to ensure that we give you the best experience on our website. If you continue to use this site we will assume that you are happy with it.Ok